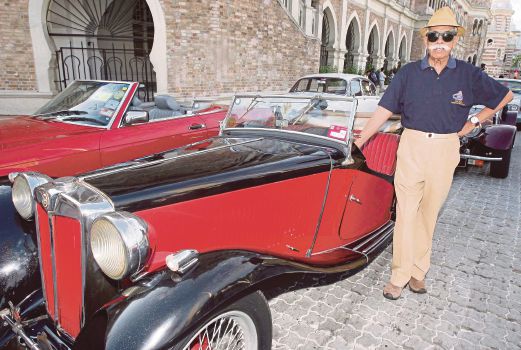 And when news of his passing broke at breakfast on the first day of Chinese New Year, I was quickly reminded of an early morning telephone call from him less than a year ago just to tell me how happy he was that the two menacing black spots in his lungs had sensationally disappeared.

Hang on, I thought to myself as he was speaking, I knew he had had close calls before but I never realised there were “issues” about his lungs. Then he went on: “A few weeks ago, doctors detected two black spots in my lungs and after some tests confirmed the condition was serious and said they had to start chemotherapy treatment.

“That was when some of my relatives suggested that I go for acupuncture and Chinese traditional herbal treatment, which I later agreed. After only two sessions of this treatment, further medical tests amazingly showed that that the black spots and cancer cells were gone. Isn’t that great?”

“Yes, certainly Pak Ungku. Patik will pray for your good health,” I said, addressing him in the normal but formal royal court language. Pak Ungku. Everyone outside the inner circle of the Negri royalty called him that, a term of respect plus endearment.

So Pak Ungku went on in that telephone conversation: “I want you to follow me to the acupuncture clinic on my next appointment and see for yourself. I will come and pick you up.”

And there I was one afternoon witnessing him undergo treatment and getting prescribed with all kinds of Chinese herbs. It might not have been so mind-blowing if Pak Ungku was not, at that time, already 88 years old and that the cancer diagnosed earlier on him by doctors was at an advanced stage.

Pak Ungku had maintained occasional communication with me ever since his son Tunku A’amash died four years ago of leukaemia. A’amash, fondly called Vic, was not only my former classmate and very close buddy, he had also married my cousin, Sharifah Maheran Syed Mahadzar. So there was that kind of link, with Pak Ungku calling me every now and then to comment about what I had written in this column.

The connections between us did not end there since he was a patriarch not only of the Negri Sembilan royalty, but also among old boys of the Malay College Kuala Kangsar, of which I am one. He was more than a father figure to many of the old boys and, as honorary life president of MCOBA (The Malay College Old Boys Association) had always played a key role in many of its activities. He was an inspiration, the blue blood in him showing no hindrance to his good-humoured, extroverted spirit. The tahlil prayers for him at Masjid Saidina Umar Al-Khattab in Damansara Heights last Friday, well attended by old boys, bore testimony of the esteem and high regard he had commanded.

Pak Ungku had had many close calls and near death experiences in his life, surviving a major road accident near Kuala Pilah many years ago, a boat capsize off Port Dickson followed very closely by a helicopter crash off Port Klang in 1972, a mishap which he would always relate to me.

But, all the fight in him sadly ended last week. I was told that the tumour had spread from the lungs to the intestines.

Pak Ungku, we will always remember you. Surely we belong to Allah and to Him shall we return.

The passing of Pak Ungku was one of the two sorrowful news of death I received last week. The other was that of Lim Boon Kheng, a former Penang football coach. He was 76.

Boon Kheng was one of the more successful coaches then, bringing Penang to the Malaysia Cup final against Singapore in 1977 in an epic match, which Penang lost 3-2. The football rivalry at that time was keenest among three teams — Penang, Singapore and Selangor.

As a reporter in Penang then, I had a close professional relationship with him, remembering some of his quotes till today uttered in thick Penang accent when he was upset with his charges, such as: Apa depa buat? Main macam leceh.

May his soul rest in peace.