A Big Push for Peace 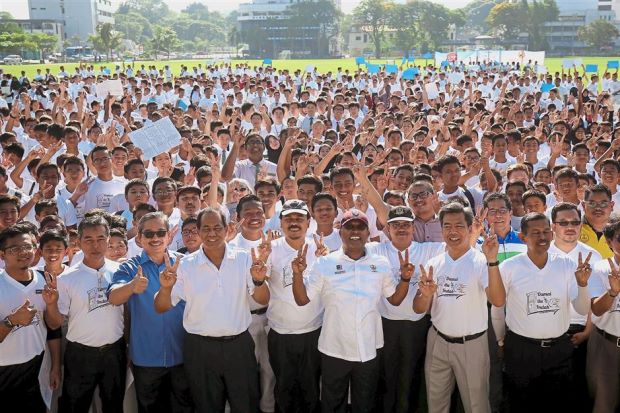 Zambry together with other dignitaries and students posing for a photo during the launch of Peace Day event by the Malay College Kuala Kangsar at the Ipoh Padang.

SOME 1,000 students from the Malay College Kuala Kangsar (MCKK), six other boarding schools and 17 secondary schools in the state participated in the Peace Day event held at the Ipoh Padang.

Zambry and other dignitaries also released three white doves from cages, before the students who were standing on the field started singing to Michael Jackson’s Heal the World.

The students, who were holding white and blue placards, also pointed the cards towards the sky, for the drone to capture the moment.

MCKK Principal Anand Baharuddin said this was the third time the college was organising the event.

He said prior to this, in 2011, and 2014, similar Peace Day events were held in the school grounds, involving only MCKK students.

Anand said this time around, the college wanted to pass the message to more schools and students, and therefore decided to carry out the event on a larger scale.

“The main aim of the event is to create peace, respect, and cooperation in a school environment among students, teachers and other staff.

“With so many negative issues cropping up in schools, the event hopes to prevent disciplinary problems, especially those involving physical violence,” he told a press conference.

He said 600 of the students at the event were from MCKK, while another 400 came from six other boarding schools and 17 secondary schools in the state.

Anand said the idea of holding the event on a national level is being considered, and hopefully MCKK will be able to achieve that next.

MCKK head prefect Muhammad Hafiy Abdullah, 17, said the first time he participated in the event in 2014 he was only in Form One.

“However the event, and its meaning is still fresh in my mind. I feel to achieve the college’s vision and mission it is important that internal issues are settled amicably between the juniors and seniors.

“So I hope those Form One students participating in the event this year will continue with the tradition, and ensure that the generations to come will know the true meaning of peace,” he added.

The event’s programme coordinator Eizad Arian Sazmal Effendi said the moment the flag was hoisted in 2014, when he was still in Form One, he gained a realisation of the meaning of the event, and the importance of it.

“I feel such an event must be promoted to ensure the message is disseminated to all school students,” he added.

Earlier, Zambry in his speech said peace and harmony are two important things that must be prioritised.

“This event is a very good initiative by MCKK to spread the meaning of peace, and its importance to students in the state.

“This is a very simple event that carries great meaning,” he added.