MCKK’s Journey to the Tournament of Champions at Yale University 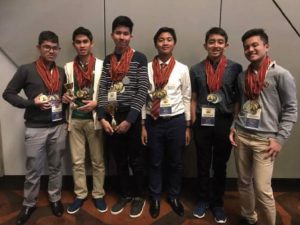 Six MCKK students have qualified to participate in the penultimate round – The Tournament of Champions – of the World Scholar’s Cup (WSC) 2018 later in November, after recording great feats in the WSC Asia-Pacific Round in Melbourne which was held from 17-20 August. The ‘journey’ began in Penang last March, when the two teams of three members each took part in the Regional Round. All six students qualified for Melbourne from Penang, with a combined haul of 21 gold and 24 silver medals.

WSC is a very demanding academic competition. This year’s theme is “An Entangled World”; and the syllabus covers six subject areas: (i) Literature (Voices of the inseparable), (ii) Social Studies (Black Markets), (iii) Special Area (Alpaca Relationships), (iv) Science and Technology (The Science of Memory), (v) Arts and Music (Braving the Distance) and (vi) History (The History of Diplomacy). Students are tested in four domains: essay writing, individual and group quizzes, elocution and team debates, on all six areas.

While the harvest from Penang was a remarkable 21 gold & 24 silver, the boys did stupendously well in the Melbourne Asia-Pacific Round and even surprised themselves by winning a total of 48 gold, 16 silver and 2 debate cups. Here are details of each student’s achievements:

It is quite astounding that six students started at the first regional round, and all six have made it to the grand final, including one Form 2 student, without any casualty in between. The Tournament of Champions will take place at the prestigious Yale University, New Haven, Connecticut, from 16-21 November 2018. It will be a most memorable experience for these dedicated boys.

The college’s immediate task is to secure early cheap flight tickets for the six participants and one teacher-in-charge. It is estimated that the college will need RM66,500.00 to get all seven to Yale. The magnitude of the WSC rigours on the part of the student-participants deserves to be supported. Contributions can be made to:

Please contact teacher in charge, Sharifah Nor Azam Binti Syed Zainol Khodki at +6012-5257053. The MCKK flag will fly at an Ivy League university, even for just one week.