College that Made Leaders

THE Malay College in Kuala Kangsar, Perak, now better known as Maktab Melayu, is today one of the leading residential schools in Malaysia. However, unlike other residential schools that exist all over the country today, of which all but a few were founded in the post-independence era, the Kuala Kangsar institution is five years short of its centenary.

It is certainly the longest surviving residential school in the country. But more importantly, it can look back on a unique history which saw it make a significant contribution to the social and political development of 20th century Malaysia.

The Malay College was opened in 1905 by the British colonial authority which envisaged for it a dual role: to give the children of the traditional Malay elite an English education and to prepare the more capable of them for careers in the government.

Driven by the belief that governance was the prerogative of the Malay elite from whom the British had in the first place taken over the running of the country, the institution was seen as a means for limited participation in the government. The provision of an English education was necessary to integrate Malays into an essentially British system of administration. 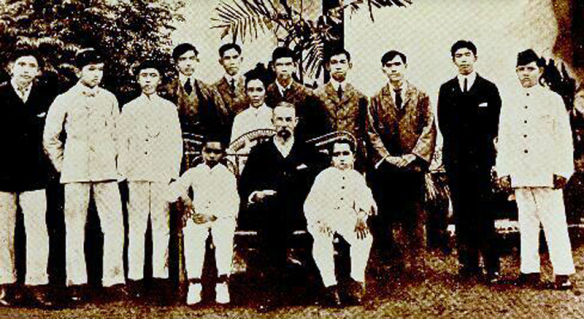 An important consequence was that the Malay College became the major conduit through which the elite was conveyed from its traditional setting to modernity, preserving and enhancing its status and enabling it to remain relevant within the Malay socio-political order in the context of the colonial polity and, later, the emerging new nation.

It is worth noting that at the time of independence, a few of these Kuala Kangsar-educated Malays were reigning monarchs while a significant number held the highest positions in the administrative service within a viable and competent modern bureaucratic system.

Looking at the original character of the Malay College from the viewpoint of the present, the institution would strike one as a strange and curious phenomenon. In the first instance, aristocratic boys at a young age were taken from the security of a traditional upbringing in a home environment and transported into an unfamiliar environment modelled on British elite institutions. They were educated in a manner which was foreign to them and which sought to mould them into individuals who were in some danger of being alienated from their traditional entity. 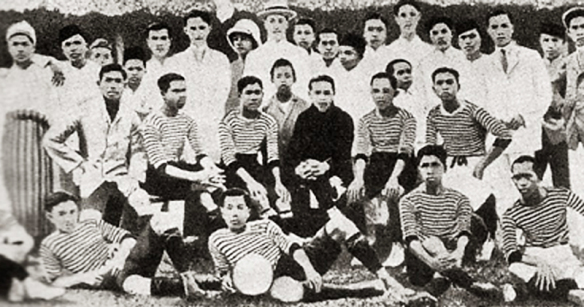 Football at the Malay College in her early days, c.1906-7. Raja Kamaralzaman, the first head boy of MCKK, is seen reclining next to the football.

Yet the evidence we have from many old boys of the college suggests that the school provided a healthy and nurturing environment for privileged adolescents who benefited from the discipline imposed.

The small doses of upper-class English values mixed with Malay culture were as often mutually reinforcing as they were contradictory and appeared to have produced mainly English-educated Malay individuals rather than Anglicised misfits. Many enjoyed their stay in Kuala Kangsar to the extent that recounting their life at the institution was a welcome and pleasurable pastime.

The essence of the education introduced at the Malay College lay in the belief that only a certain type of education would produce good leaders. For this reason, those who were directly concerned with the future of the Malay College right from the start shaped it along the lines of an English public school. They believed in the superiority of this type of school in imparting a moral education and shaping character.

The experiment was soon deemed a success – so much so that the institution was touted as the “Eton of the East”, drawing the attention at one time or another of other colonial educationists around the region.

The emphasis was on an all-round education which gave equal stress to scholastic achievement, physical prowess and moral fibre. Formal lessons were supplemented with extracurricular activities such as sports, cadet corps drills and exercises and boys’ scout training all designed to encourage a broad educational experience.

It was believed that “character building” would follow from the influence of British headmasters and some British teachers with public-school backgrounds who were expected to be exemplary figures and who were especially employed to closely supervise the activities of the students around the clock.

By the time the school was forced to close its doors in 1941 due to the Japanese invasion following the outbreak of World War II, the Malay College had educated more than a handful of future sultans from the Malay peninsula and one from Brunei, most of the Malay officers in the Malayan Administrative Service, as well as two doctors, an engineer, several future diplomats and a future prime minister of Malaysia.

To name but a few, among the old boys of the college who came into prominence in the post-war era were Tuanku Abdul Rahman Tuanku Muhammad, the first king of independent Malaya, Tun Abdul Razak Hussein, Malaysia’s second Prime Minister, Tun Abdul Malek Yusuf, the second Governor of Malacca, and Datuk Mustapha Albakri, the first Speaker of the Malayan Legislative Council.

When the school reopened after the war, its character was changed. It became an ordinary residential school, no longer confined to boys from the Malay aristocracy and entrance was based mainly on merit. Nevertheless, it maintained a reputation as a leading residential institution, and many parents continued to hold it in high regard and sought their sons’ entry there.

Today, although many of the old boys of the pre-war years have moved on from centre stage, college boys of the post-war generation continue to achieve prominence.

Datuk Hisham Albakri, a prominent architect, and a second-generation old boy by virtue of being the son of Datuk Mustapha Albakri, Datuk Seri Anwar Ibrahim, who, until his sacking, was a potential Prime Minister, and the late Tan Sri Yahaya Ahmad, a dynamic businessman, are some of the examples of the heights to which Malay College boys have aspired and achieved.

All in all, the college has had an impact beyond even the expectations of those who were initially involved in its foundation.

Thus, the opening of the Malay College in Kuala Kangsar in 1905 marked an important milestone in the history of 20th century Malaysia. Although the dual role of the institution did not last beyond the beginning of the Japanese occupation in 1941, its impact was more lasting for it not only served to convey the Malay elite from its traditional setting into the modern era through education, but also laid the foundation for the emergence of a modern Malay administrative elite. The modern Malay-dominated bureaucracy has been one of the institutions that shaped the political history of independent Malaysia.

The Malay College became a permanent feature in the educational landscape of Malaysia, and the school continues to contribute to the making of 21st century Malaysian history.

* Dr Khasnor Johan is author of Educating the Malay Elite: The Malay College Kuala Kangsar, 1905-1941 (Pustaka Antara) and The Emergence of the Modern Malay Administrative Elite (Oxford University Press). She taught history at Universiti Kebangsaan Malaysia and is Research Fellow at the Australian National University, Canberra.